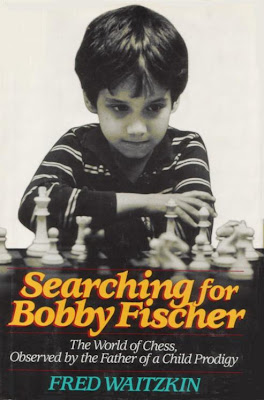 The movie "Searching for Bobby Fischer" (1993), by S.E. Zaillian in his directorial debut is, maybe, the best film ever made about chess and chess world. If I remember rightly, I wrote something about this movie some years ago on this blog . Usually, chess-based films are pieces of nonsense unable to grasp the magic and the passion that stir the hearts of players all around the world.

"Searching for Bobby Fischer" is such an interesting film about the subject because the game itself is not the point of the plot. Indeed, it's a movie about the relationship between fathers and sons. More accurately, about how fathers project their dreams of grandeur and success on their sons, specially on the more gifted ones.

Fortunately, the film was screened in Europe. Its British title was the slightly absurd "Innocent moves". It was corrected translated into Spanish as "En busca de Bobby Fischer". I've just received an e-mail from a chess-colleague, informing me that a film about the mythical American champion had its premiere in 2011 Sundance festival. The news (in Spanish) has the beginning sequence of "Searching for Bobby Fischer", as the long shadow of the genius of Brooklyn is a constant feature along the Zaillian's movie. Fathers encourage their sons to study chess without a break, in order to become the new Fischer, the new highest priest of this bizarre religion.

In my first week here, in a discount bookshop, I found the novel which the film was adopted from. It has been, obviously, the book on my bedside table during this lonely September. In it, The New Yorker writer Fred Waitzkin relates the discovering of the game by his son Josh, and the way the little boy becomes the best in his age in the US. They told us the conflicts and the doubts about the increasing dominant role of the hard chess competitions and training in his kid's life. The book has some narrative material not used by the film (the travel of Fred and Josh and his trainer Pandolfini to the former Soviet Union). Smartly, Zaillian picked the most powerful ideas of the novel: " At tournaments, parents clasp their tembling hands, root as if it were life or death for their kid and dream the lusty dream of their child's immutable, unmatchable genius. Breathless and flusher from rooting and worrying, they say 'I don't like how to much time we're putting into this' but at the next tournament there they are again, commiserating with one another about the craziness of so much misspent passion"