The ides of March. 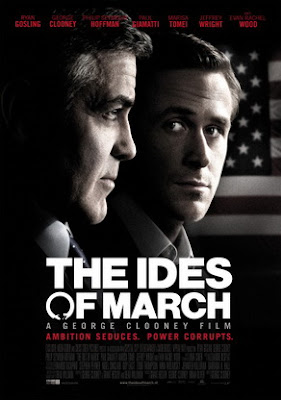 Right now, I'm paying attention to two electoral campaigns: the Spanish legislative and the US Republican Primaries. In both two cases, it's difficult to find differences between the main puppets... sorry, I mean candidates. The programs have just been hidden and the debates are focused on the Romney's mormonism or on different Rajoy's salaries. So, to spend Saturday's evening, I went to the cinema to watch the fourth film directed by Clooney, set in the Presidential Primaries of the Democratic Party.

Clooney is not only one of the best payed faces of the star system, but also a citizen worried about the political involution of American society. He is a “liberal” in the American meaning of the term. He produced and starred the great “Syriana” to show the inextricable mixture of corporations' interests, corruption, lies and money squandering from federal budget, which is the very essence of US foreign politics. Who overthrew and killed Gaddafi? Are the Talibans enemies or friends? Are really the nowadays protests in Syria a spontaneous rebellion against a dictatorship?

Now, Clooney's back to political arena with “The ides of March”, an adaptation of “Farragut North”, a play by Willimon. He played the central role: the perfect Democratic candidate (neutral, moderate, constitutionalist), surrounded in his electoral campaign by some of the best actors of this time: P.S. Hoffman, M. Tomei, P. Giamatti. The result is a lucid portrait of politics hypocrisy. The only important thing is to sell the product and to control the maths of the complex Primary system, where the decision of a corrupt Regional baron can decide the destiny of a candidate. The persons behind the public image of candidates can be insignificant idiots, lacking any ideal or morality, but with the support of an adequate electoral machinery, anyone can be a public leader. It seems there aren't many differences between the two sides of the Atlantic Ocean.