V for Vendetta (the comic) 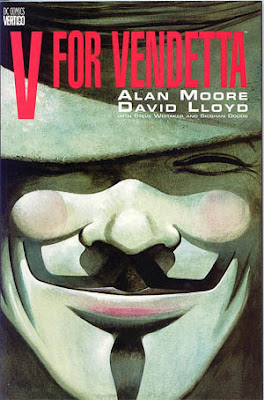 The city where I am living is not an American ordinary medium-size one. There's, even, a comic shop! So, I had to buy a volume with the complete compilation of this famous comic-book series, (1982-85 and 1987). On this blog, we already reviewed the homonym film (2006) inspired by the comic. Nowadays, the characters and the dystopia imagined by Allan Moore have become more fashionable than ever, in this rare Fall of massive demos against the plunder of public budgets and the democracy's kidnapping.

Unfortunately, I am not very keen on comics, but I have enjoyed nicely the drawing by David Lloyd. But not only the arts impressed me. I read repeatedly some of the chapters in order to grasp the deep and abundant topics suggested by the story.

There are several important differences between the comic and the film. The comic doesn't stress so much the discussion about the justification of political violence to change an oppressive regime. In the comic, the British Norsfire regime, with its omniscent “fate” is depicted as an abominable one, so V's terrorist violence against the power is immediately justified. Which will be the future of our “bank-ruled” democracies if the impoverishment and the loss of legitimacy go on?

Other important nuance of the comic is the idea of self-liberation, an indispensable step in the path of social liberation. V is able to fight successfully against the dictatorship, because he has defeated his own personal weaknesses, in some kind of enlightenment. The climax of the story is maybe when he is transmitting Evey the flag of liberty. The reader can feel along these unforgettable two dozen frames that change is not only necessary, but also unavoidable.

“Happiness is a prison, Evey. Happiness is the most insidious prison of all. Is that happiness worth more than freedom? All convicts hunched and deformed by the smallness of their cells; the weight of their chains; the unfair of their sentences. I didn't put you in a prison, Evey. I just showed you the bars.
You were in a cell, Evey. They offered you a choice between your principles and the death of your body. You said you'd rather die. You faced the fear of your own death, and you were calm and still. Try to feel now what you felt then.
The door of the cage is open, Evey. All that you feel is the wind from outside. Don't be afraid. Five years ago, I too came through a night like this, naked under a roaring sky. This night is yours. Seize it. Encircle it within your arms. Bury it in your heart up to the hilt. Become transfixed, transfigured forever”

Leo ha dicho que…
As long as I read your articles, I realize witch is my real position in the world... deeper and depper everyday
18 de octubre de 2011, 14:03

Anónimo ha dicho que…
It wasn't my goal, old friend! My only aim was to share the impressions I got from the films, the comics or the novels I read.
Thanks for eying my blog!
19 de octubre de 2011, 1:32