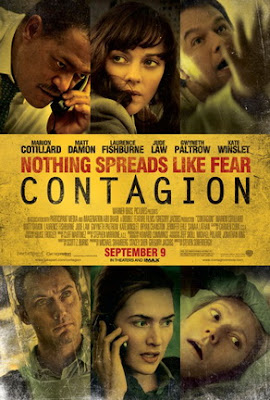 As it's well known, sci-fi movies (and other works) always reflect society's underlying feelings. It might not be very difficult to write the basic plot of the TV series “The walking dead”. A short walk in any big American city lets you to see an army of homeless people wearing rags and towing carts full of garbage. An army of zombies, expelled from paradise. You feel lucky not to be a pariah. You do still have credit to go to theaters and to eat large popcorn. You are still a human being, that's to say, a customer. But you know you can be bitten by the poverty at any moment and you will lose your home, your credit card, your place in the big table of capitalist world.

Last weekend, I went to theater to eat large popcorn ant to watch last Soderbergh's film. It's an action-thriller centered in the spread of a deadly epidemics. The first part of the movie is really distressing. Apparently, the disease is transmitted by simple contact and its rate of mortality is very high. You can feel apprehensive if the guy near you in the theater begins to cough. This unstoppable feeling of fuzzy fear is, in a certain way, a good image of the big individualism of Americans. Especially, in reference to personal spaces. The lesser physical contacts the best you feel in such an individualist society.

On the other hand, the story could be absolute real. The more likely disaster our civilization could suffer is this sort of pandemic involving an antibiotic resistant bacterium or an antiviral-resistant virus. Obviously, not all individuals would die, but our history would change. I'm just remembering Terry Gilliam's “Twelve monkeys”.

The general approach of “Contagion” is interesting. It seems more a documentary than fiction. We see the initial steps of the disease, which begins to kill people in different countries. After all, we live in a globalized world. Medical authorities and researchers realize quickly that the epidemics is really dangerous, but they can't avoid the riots when the quarantine is decreed. The problem is that this “documentary-approach” is difficult to manage. Public is used to noisy, violent and lively films, and “Contagion” becomes boring and boring when the film is winding on. The happy end is, of course, absolutely disgusting.