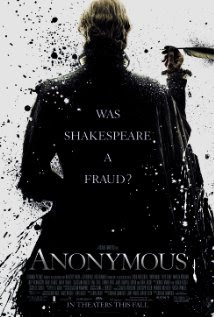 One important issue in the history of English literature is the authorship of Shakespeare's plays. Some evidence may indicate that William Shakespeare, the actor from Stratford-upon-Avon, wasn't the author of the plays but a proxy to shield the identity of the real one. The supporters of these theories argue that Shakespeare lacked both the literary education and knowledge of life in the Elizabethan court to write these plays. I'm not an expert in English literature (nor in its Spanish counterpart!), so I cannot opine about that issue. But this kind of theory denying authorship seems biased to me. “Shakespeare could not be one of the most important authors of Western literature because he wasn't a member of the court” recalls the argument that space aliens must have helped ancient Egyptians build the pyramids or Mayans predict eclipses. There is an obvious implied class prejudice in the case of the Shakespeare theory and of racial or cultural bias in the latter.

“Anonymous” is a historical drama that relies directly on the so-called “Oxfordian theory of Shakespeare authorship”, that is to say, that the real author of “Hamlet” and “Romeo and Juliet” was Edward de Vere, Earl of Oxford. According to this theory, he used the plays to mobilize popular crowds in the political struggles surrounding Elizabeth I's succession, inspired by the familiar (and perhaps naïve) idea that "The pen is mightier than the sword."

The actors are good, the period look credible, and I was able to understand most of the dialogue, but I didn't like the film very much. It was slightly boring. I even left the theater for two minutes to use the bathroom (the first time in a long life of being transfixed religiously to the moving images in cinemas!) Maybe the overwhelming expressions of love, hate and war that Shakespeare's plays contain were not well used by Emmerich, the director. Or maybe I missed this part of the film, as Shakespeare's (or de Vere's) deep and resounding words, most of them of Germanic origin, are still too difficult for me to understand.

El Sapo ha dicho que…
This reminds me "Shakespeare in love", one of the few movies we've been unable to watch till the end.
Welcome to the realm of the ones who have left the theatre for some minutes! Given that one of the classical reasons (having a ciggie) is barred for you, I am also puzzled that the other classical hadn't hit you yet. I thought you liked beer a bit more!!
Emmerich making such a movie. Curious...
BR