The Man Nobody Knew. 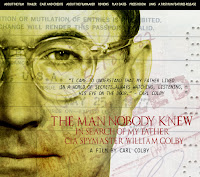 (Naomi helped me with this text. Thank you!).

This is the second movie I've seen here about a former director of an American intelligence agency. Taking into account the number of security agencies said to exist in this country, I would have needed several more months to watch a movie even about one director of each agency. Unfortunately, I am leaving the nice city where I'm living. I will miss the giant popcorn and soda combos.

The film is a documentary about William Colby, who served in CIA since its founding and was its director from 1973 to 1976. An unusual aspect of the film is that its screenwriter and director is Colby's second son, Carl. So, it is a very personal work. I was interested in how a son would handle his contradicting feelings about his father's actions, especially in the case of such a controversial public servant as William Colby.

Colby's career was the archetype of the American intelligence agency's effort to control the postwar world and to stop the spread of communism. In some way, the positions he occupied and the tasks he completed reflect the evolution of American self-image as the pre-eminent world power. As any other empire in the past, they needed to justify their hegemony, especially to the US public.

Colby's first missions were in the Office of Strategic Services (OSS), fighting against Germany during the Second World War. US officials were the champions of freedom then. As a member of the newly created CIA, Colby worked in Rome in the 50's. As is well known, a complex system was designed to prevent the communists from winning the power in Italy. Colby, a staunch Catholic, was the perfect man to manage this system, which used close collaboration between Catholic Church, Christian Democrat party and Italian secret services. The “champions of freedom” knew who the Italians ought to vote for and thus tried to determine elections' results. I was surprised at the grade of relationships between Italy's powerful people and the American agents. According to the documentary, Colby's and Prime Minister De Gasperi's families were friends.

In the 60's Colby became the CIA's station chief in Vietnam. During this third step in Colby's career, it's arguable wether American fought for the liberty of Vietnam. In Saigon, Colby's family was also friends with Vietnam's president, Diem. One of the problems with being friend of your hosts in foreign countries is that you have to look the other way when you decide to overthrow and assassinate them, as happened with Diem. As an ultimate effort to win the war, Colby launched the controversial Phoenix program, a terrorist attempt to destroy Vietnamese infrastructure. This part of the documentary is different, with fewer interviews and more images. These terrible images from the war were precisely what changed the way most of the American public looked at the the US role in the world and that war, gradually withdrawing their support. They realized that people like Colby were not the champions of freedom, but hypocritical death angels. At the end of the documentary, when Colby was holding the post of director of the agency, in the early 70's , familiar faces appeared on the screen: George H.W. Bush and Donald Rumsfeld. Nobody seemed to be surprised in the theater.