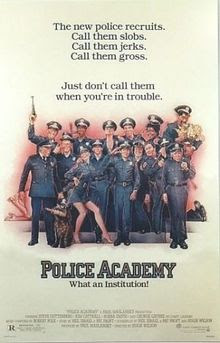 Last night, “Police academy” was on TV. It livened my lonely dinner up.
This comedy film was a huge success when it was first showed in 1984. It spawned six bad sequels, which effect was to devaluate the original film. Although, “Police academy” influenced all the American yob comedies produced later.
The plot is pretty flat: a funny selection of stupid candidates to become cops, enrolled into a stupid academy. But the formula worked very well on the screen. The visual gags, the jokes about authority, sex or racial prejudices have become classics.
In the last part of the film, the inexperienced cadets were trapped in a brutal riot, and I thought about the political and social violence. With the nowadays demolition of welfare state and the change in the global power, hard years are coming. If we assume that the state has the legitimate monopole for the violence, someone has to exert this violence. I thought about my friends who work as policemen. All of them are good people, who like to help. But I also thought in one of the characters of “Police Academy”. He said that what he liked the most was: “beat the public”. I thought with sadness about Vitoria, 1975 or Greater Cairo, 2011.