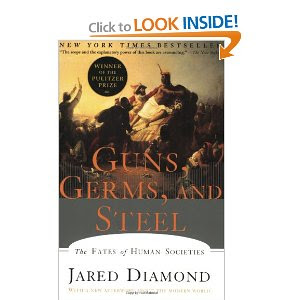 My fellow, Tomás, lent it to me two years ago and I spent good moments reading it. I’m no sure if I give it back to him, because: “There was only one guy more stupid than the one who lent a book, is the one who gave it back”.

I’ve read some books by the same author ("Collapse" and "El tercer chimpancé"), and all of them impressed me. Jared Diamond seems to know about everything. He writes about languages, history, genetics, politics. In fact, “Guns, germs and steel” has the pretentious subtitle: “A short story of everybody for the last 13:000 years”.

The book studies the reasons of the apparent superiority of some human groups above others. Translating it into concrete questions:

The answers are well known in any of those cases: there were big differences in technology and in organization between the invaders and their victims. In some cases, nature helped the winners: the most terrible arms of the Conquistadores in the Americas were the germs and the diseases, which Amerindians were not immunized against. But the original questions are not answered. Why the predominant people (white men, Chinese, bantu farmers) were superior in technology or in organization to subjugated people?

The book argues that the differences in power and technology between human societies originate in environmental differences, which are amplified by various positive feedback loops. These advantages were only due to the influence of geography and were not inherent in the Eurasian genomes.

According to Diamond, there were two big environmental advantages of Eurasia over other areas in which farming apparently developed independently. The various Eurasian inventors of farming in Fertile Crescent and China had by far the best natural endowment of crops and domestic animals. The superiority in domestic animals was the more relevant as other areas had no such animals as horses, camels, cows or sheep.

Other big Eurasian advantage is that its mainly East-West axis provides a huge area with similar latitudes and therefore climates. As a result it was far easier for migrating Eurasian populations to adapt those plants and animals to which they had become accustomed to new areas. The Americas' North-South axis forced Amerindians, Unfortunately for them, to adopt new crops and animals as they migrated from North to South because of the wide variation in climates. In the same way, Africa has natural impassable borders (Sahara desert and tropical forests) which avoid the travel of farming through the whole continent.

Summarizing, human history was determined by natural (geographical) conditions and no by differences between human races, as racism thought. Life always develops in a mysterious way.